skip to main | skip to sidebar

Today is the 18th anniversary of my official first date with my husband. I remember that evening well... we went to the local fairgrounds for a concert. It was a double bill with Joe Cocker opening for Stevie Ray Vaughn. We joined some of his friends, his brother and our now sister-in-law. In fact she was the one who set this whole event up... It was actually a bet between my husband and his roommate. They each bought two tickets and challenge each other to get a date for the show. My sis-in-law "Rocker" is the one who asked if I wanted to go, and when I said yes, she said that her boyfriend's brother would be calling me about it.

I was dressed in my best blue jeans, a deep purple blouse and gorgeous purple & black pumps. The evening started out perfect; warm but not humid, with scattering of stars overhead. But then half way through Joe Cocker's performance, it started to sprinkle. My husband turned to me and asked me if I wanted to find cover (it was on outdoor concert and we were about 25 rows back from the stage). I turned to him and smiled as I said " No I'm fine. A little rain never hurt me. Plus I know I won't melt (a reference to the Wizard of Oz...) " He laughed and we hugged as we applauded the final notes of "Leave your Hat on". Once SRV came on, the feeling in the air was absolutely electric. He was a fabulous performer and although I had not followed his music, I was quite impressed. After the show, fireworks lit up the sky.

Sadly less than 6 weeks later, Stevie Ray Vaughn was killed in a helicopter crash. But to this day, whenever I hear one of his song I remember that wonderful night, and thank God for the pieces that began to come together that night which now have created a beautiful puzzle.

Seven years from that first memorable date, on July 3rd 1997, the two of us watched the fireworks burst over the waters of the lake. When the finale had scattered a rainbow of bright sparkling colors in the dark star-lit sky, my husband proposed to me. I accepted & now we share the tradition of this fireworks show over the lake with our two beautiful sons.

Life is good. Thanks Stevie!
Posted by Proud Mom at 5:07 PM 0 comments

Summer is here and yet almost gone. Once the 4th of July is over, summer starts to fade. I cannot believe we'll be celebrating Independence Day in a few days. It seems like just yesterday that my kids were getting out of school for the year.

Where we live the state requires children to be in school for a minimum of 175 days. But really about 30 days of each year is piddled away with fluff & nonsense, so why not shorten the school year and strictly TEACH the kids when they hit the classroom. There's a lot to be said for homeschooling when you see for yourself how much time is wasted everyday. I wish more parents would visit their child's classroom, like I do, to see what goes on in a typical day. They'd be surprised how rude and inattentive some students are, which would explain why teachers spend so much time disciplining & too little time teaching. Each classroom is graced by at least one of these human challenges; my oldest son's had 3 this year!

By the way, I wish someone would explain to me why we must send our kids to school until the 3rd week of June! We live in the Northeast, where it snows in the winter... Don't these administrators realize that they must build snowdays into the school calendar? And what about those ridiculous "in-service days" that litter each month of the school year... why can't they schedule these sessions for the week BEFORE school starts, like other school districts do so the kids don't have to suffer through an extra week of school in June! Also why do we need 3 & 1/2 days off during Thanksgiving week plus 2 extra days off for winter break?

Anyways, now it's summer vacation and I've worked out my schedule so that I can spend more time home with the kids. We've signed up for a bowling program, have arranged several play-dates, & had a few sleepovers so far. Our annual family camping trip is just around the corner and we've made it to the lake, the library & the strawberry patch already. We'll also go to Boston's famed Fenway Park for a game, as well as venture down to Camden Yards for a Red Sox/Orioles match. Going to visit family in PA along the way, and maybe stop for a beach day in Delaware, Jersey or Massachusetts as well. Hoping to read at least volumes 2 & 3 of the Harry Potter series, catch a few more fish, play some rousing games of croquet & bocce, do some hiking & biking, and just plain relaxing before it's time to send the boys off to school again.

Meanwhile, I hope that you have a fabulous summer and spend some genuine quality time with your family making your own Summer of '08 memories. Think sunshine!
Posted by Proud Mom at 1:27 AM 0 comments 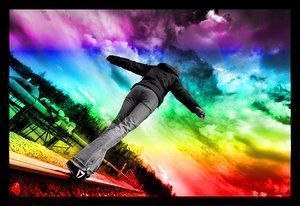 Live with intention. Walk to the edge. Listen hard. Practice wellness. Play with abandon. Laugh. Choose with no regret. Continue to learn. Appreciate your friends. Do what you love. Live as if this is all there is.
~ Mary Anne Roadmacher-Hershey

Proud Mom
I'm a crazy mix of hot and spicy, warm & fuzzy, cool & soft... I'm friendly but cautious, outgoing yet reserved, silly as well as serious. But one thing's for sure, I love to connect with people. Making a positive impact on someone's life is my mantra. My husband and children will always be my number one priority, no matter what! Life is a long journey on a bumpy road. So I'm teaching my children the importance of respect, grace, perserverence, honesty, humility, compassion, kindness and determination. I am a daughter, a sister, an aunt, a niece, a peacemaker, a friend, a clerk, a volunteer but my most valuable role is that of a wife and mother. I hope to leave a legacy of love, honor and loyalty.

Glimpses... Click these links to see snapshots of me

Welcome to my babble & musing. Please join my journey & learn what makes me tick.